Posted by Katy on Jun 16, 2009 in On The Road
Just when you thought I had totally abandoned my blog…I’m back! I had been devoting every spare moment to prepping for the Funky Junk Sisters Antique & Flea Market show but I’ve taken a couple days to recover from all the wonderful mayhem and now I’ve returned to share all the excitement!
Ok, so now onto the details…I was slightly nervous but super excited about doing this show and after many late nights of sanding, painting, pricing, wrapping, loading and more I arrived Friday the 12th for setup. After meeting the Funky Junk Sisters Dixie and Linda all fears went away and total excitement took over! Dixie and Linda are the bestest gals ever and know how to put on a great show! I am so bummed I didn’t get more pictures but I will post some links to some other blogs throughout this post…stay tuned.

First off I have to show you my booth. Granted I’m still new at this but I am super excited at how it turned out. This is what it looked like before the long line of customers started browsing.

This set of 4 yellow wrought iron chairs were the first thing to go and then within the hour I sold my second set of burlap covered vintage chairs that I had stenciled black numbers onto…I so wish I could have captured a picture of those but I had only pulled out 2 of the 4 when the happy buyer swooped down on them and purchased them…maybe I’ll get lucky and she’ll see this post and send me a pic :0)

There’s a few things I wished I’d done better but once the customers started arriving it become just plain fun as people discovered fun treasures and I began to meet and talk with so many great folks…it was really a blast!

Of course as things sold it took on a different look as I continually scurried around filling in holes and rearranging to keep it looking fresh.

Sunday was a little slower then Saturday but it gave me a little time to regroup from the day before. Still had some great customers and people were more inclined to stand around and chat which was great.

I also was able to spend some time getting to know a number of the vendors which I had formally only known through blogs. Of course the Funky Junk Sisters were awesome and I can’t wait to do another show with them! They even were kind enough to include a pic of me and my booth in their blog.

One of my neighbors was the super talented Patrica of Tippy Stockton she made amazing things out of old stuff like her amazing candle holders. Stop by her blog to see more pics of her fabulous booth and other creations! 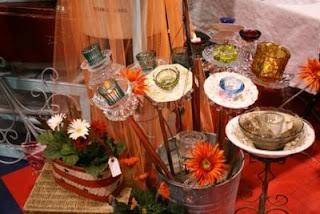 Two booths down was Today’s Country Store and Susan Wheeler. They seemed to be having such a great time both days and I was continually curious about all the funny things being said as there was so much laughter coming from that direction…wish I’d been closer to hear what was so hilarious! ;0) They had some amazing stuff and it was great meeting Susan Wheeler and Kris as well as chatting with Amy some more!

Such a beautiful setup they had(I wish I had a place for those chairs!)…check out more here. You can also visit there store in Sumner, WA. Their were other great Sumner vendors there too.

So many other fabulous booths and great gals that I met! It couldn’t have been more fun! Thanks again Funky Junk Sisters for all your hard work and commitment to making this a success. Here’s to next years show…if not sooner!

I also have to send out a great thanks to my dear friend Charity who not only was a huge support to me but put in a number of hours setting up and even showed up for tear down at the end…you are awesome girl and I couldn’t have done it without you!!! As well as my parents and brother and sis-in-law for all the support and helping hands during the preparation of this show…you are the best and I know I owe you!

If you missed out on the show this year be sure to keep an eye out for next years show which I’m sure will even be greater then this one…if that’s even possible.

Now back to reality but with such wonderful memories and new friends!